As you might know, I’m taking a small break from blogging as I’ll be in Japan on vacation for three weeks! I am super excited for this holiday, especially as it’s my first overseas trip with my partner. I did not want to leave the blog completely abandoned – so I’ve decided to leave a couple of Japan related book posts scheduled. This is the first of them!

I am certainly not alone when I say that I love going to bookish location in new places. Yes, the books may either be i) the same as the ones I get back home OR ii) in a language I don’t understand – but that doesn’t take away my sense of wonder. Here are a couple of recommended bookish touristy things you could do in Japan! I’ve been to some of these, and plan to visit the others. I hope to update my posts with up to date pictures as I go along.

Also! My holiday will be well underway by the time this post is published, so I apologise for lack of commenting until I am back.

Yes, there is one in USA as well – but this is for all those poor souls (like me!) who can’t quite make it there yet. There’s also a kind of magic here you’ll only find in Japan. Where else in the world will you see the trio, Dumbledore, and the portraits at Hogwarts speak in voiceover worthy of anime studio?! The Japanese are also the best at dressing up, the dedication all these teenagers have to wearing full costume and make up at a theme park astounds and delight! No where else on Earth will you see a gang of school girls dressed up as Kiki (from the titular Ghibli movie) taking over The Hogwarts Express.

The Hogwarts side of the park is beautifully constructed, with its own Hogsmeade, castle, and an array shops ranging from Madame Malkin’s to Honeydukes. There are also two rides and a tour of the castle available 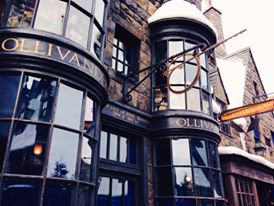 . Be warned, this park was crazily full when I went there: so avoid weekend and public holidays when you go. I had to wait 1 hour to get food, and 2.5 hours to even get into Hogwarts.

How To Get There: From JR Osaka Station, take the JR Osaka Loop Line to Nishikujo Station, then take the JR Yumesaki Line to Universal Studio. This may sound like a lot of changes, but I promise you it’s quick and convenient! If you get lost, follow the people dressed up like cartoon characters.  OFFICIAL SITE.

I haven’t personally been here, but fans of The Little Prince can visit Hakone and visit a museum dedicated to the book and its author, Antoine De Saint-Exupery. As Hakone is only about 2 hours away from Tokyo, this is quite a doable daytrip. The museum is in a French inspired village that features a European garden, Chapels, a small hall and several cafes/restaurant with themed food.

Hakone is a great location for a daytrip even without a visit to the museum. I went there last year, and the beautiful sceneries of the Owakudani Valley and Lake Ashinoko was well worth the trek out of Tokyo. On fine days, you’ll even get a great view of Mt Fuji!

As I’m sure the Internet would have assured you numerous times, Japan is the land of weird and wonderful themed cafes. One of the most popular cafe chains is based Lewis Caroll’s Alice in Wonderland. These cafes have gorgeous settings and creatively themed foods. Be sure to make a reservation ahead of time if you plan to go during the weekends or at night, as they tend to get busy – this can easily be done on their website, which I’ll link below!

Although they’re a chain, each branch has different interior decoration, with the most lavish (as far as I can tell by pictures) being Alice in a Labyrinth in Ginza, and Alice In An Ancient Castle in Ikebukuro.

How To Get There:  Multiple branches within Tokyo, see OFFICIAL SITE.

Gion: Memoirs of A Geisha / Geisha of Gion

Kyoto is hands down one of my favourite cities in the world, as parts of this ancient city still feels suspended in time. While Gion of present day is a lot more commercialised than the streets described in the books I mentioned above, there’s still a great degree of mystique surrounding the karyukai and geiko community. You’ll see a lot of tourists or hired staff dressed up as maiko or geiko during the day all around Kyoto. To see the real deal, your best bet is to pay for a tourist package, or arrive during one of the seasonal dance shows such as the Miyako Odori.

We had the fortune of bumping into a geiko on Hanamichikoji, one of the remaining entertainment districts. She was walking so fast we barely registered our luck. It’s a marvel that these women still play a role in upholding ancient traditions, while the world changes around them.

How To Get Here:  From Kyoto Station, take bus 100 or 206 to the Gion Bus Stop (in front of Yasaka Shrine). Alternatively, take the Keihan Line from Kyoto Station to Gion Shijo Station.

The Tale of Genji is purportedly one of the world’s first novels, written by noblewoman Murasaki Shikibu.  The last ten chapters of the tale is set in Uji, which was once known as a famous getaway location for aristocrats of the Heian period. It’s little wonder, as Uji is a scenic town located a short distance from the old capital, Kyoto. Nowadays, it’s more renowned for green tea than anything else, but there still lies a museum dedicated to the Tale of Genji in these parts.

I’ve loved Haruki Murakami’s writing long before I even set eyes on Japan. In some ways, his description of Tokyo, especially Shinjuku, after dark made the city feel so familiar to me. To get in the mood, I suggest you read After Dark before embarking on your adventures in Shinjuku after sunset.

Also, don’t forget to drop into Books Kinokuniya in Shinjuku! It’s where Haruki Murakami bought his first fountain pen and began his writing career. It’s also one of the most comprehensive bookstores in the city.

Have you been to any of the places above? Which do you want to visit in particular? Let me know down below!