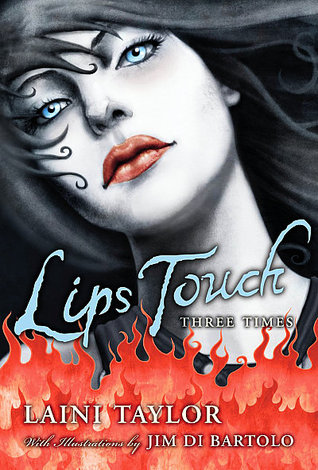 NOTE: This is a prescheduled post. I am on holiday, so I will reply to all your comments when I get back mid-December! Take care 😀

This review is brought to you by the fantabulous Jeann of Happy Indulgence. I was crying to Jeann about I am falling way behind on my blogging schedule as I was going on holiday, so she kindly offered to write a review to help me out. THANK YOU JEANN!

I can see why Goblin Fruit was the first one in the book, it slowly eases us into the highly imaginative brain of Laini Taylor. Kizzy is a girl who was plain and just wanted to be loved, so when a goblin posed as a handsome boy at her class, she couldn’t say no even when it was too late. It very much felt like a typical paranormal, but one with a dark and sad twist to it. It definitely felt very Grim, with the message of “be careful what you wish for”.

How then, had her knife come to be on Kizzy’s pillow, and her swan’s wing, torn feather from feather, in Kizzy’s room?

This was my favourite story of the lot, inspired by Hindi’s version of heaven and hell. There’s black magic here, curses, karma, and Indian mythology which was really fascinating. Ana is a wonderful character who was so sweet and careful, as speaking or singing will result in the immediate death of everyone within earshot. She was probably one of the most relatable characters in the book and I really liked her.

There are other ways of showing someone you love them, such as fetching them out of Hell.

The longest and most convoluted story of the lot, Hatchling explores the perspective of several characters, including a druj (demon) queen, another druj, a mother, and her daughter. I liked the story behind it, but having multiple point of views and a lot happening was too ambitious for the short story format. There’s a lot of flash backs and multiple perspectives which made it difficult to wrap my head around, especially with all these Eastern terms and mythology I just did not understand.

She was a girl and she was a queen and back in the mists she was a woman who had seized the moon from the sky and drunk its light so that she would never die. And she never had.

Laini Taylor has a whimsical imagination which successfully delivers some wonderful, twisted dark fairy tales all revolving around a kiss. I wish I prepared myself for the dark themes inside though, there’s rape, gore, cussing, kidnapping, death and more. While I’m usually tolerant of these themes, I was quite disturbed when out of the blue I stumbled upon “butterfly rape” and “swollen lips that wanted to eat humans”. Teaches me to think Disney before I read fairy tales….

With the exquisite, rich exploration and even combination of darker themes and different mythologies, this book kind of lost me at several places. Most would find this exciting and intriguing, but I was just confused half the time

Lips Touch: Three Times reflects my difficulty to connect to short stories, but it’s another example of Laini Taylor’s lush, beautiful and exquisite writing. Unfortunately I found it erred on the side of weird rather than whimsical at times, and it’s definitely more of a mature YA read rather than childhood fairy tales. The three fairy tales are incredibly unique and dark, based on mythology, folklore and Laini Taylor’s imagination which is an imaginative artform in itself.

Thank you Jeann for your review! I have to say, I am intrigued by the dark stories in this anthology, I’ll have to check it out.