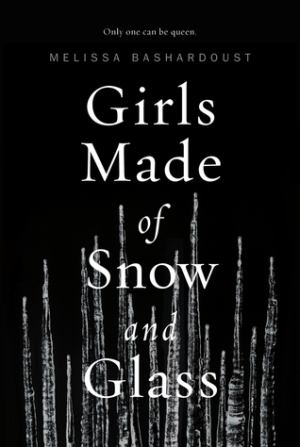 Title: Girls Made of Snow and Glass

Disclaimer: I received a copy of this book from Pan Macmillan Australia in exchange for an honest review.

Girls Made of Snow and Glass is an exquisite retelling of Snow White, reinventing a tale about jealous queens and helpless maidens into a story of female empowerment. The familiar tale is dissected with precision and carefully imbued with new layers of complexities. The final result is a gorgeously rendered story about a glass queen and a snow princess, both working to defy the roles the men in their lives have forced upon them.

“If they love you for anything, it will be for your beauty.”

Mina first heard the phrase above when she was sixteen, in the same moment she learned she has a heart of glass – incapable of beating, and purportedly also unable to comprehend human love. Her father, Gregory, the power-obsessed magician who created the glass heart, is utterly convinced Mina is devoid of the potential for love. Instead, he persuades Mina that only her beauty can pave her way to any semblance of happiness. His words haunt Mina’s steps for several years, even as she becomes queen of the northern territories of Whitespring. As Mina ages, she can feel her youth and beauty slip from her. She becomes keenly aware of her precarious position in court as her stepdaughter, Lynet, blossom into the very image of her long-dead mother – the beloved queen Amelia.

The novel shifts between two different narratives. The first is from Lynet’s point of view, set in the present day of the novel. The second timeline follows Mina from age sixteen, revealing her ascent into the role as the stepmother. This dual narrative allowed the parallels between Mina and Lynet to come into hyper-focus. The similarities range from their magical abilities to manipulate materials thought to be cold and hostile such as snow and glass, to longing to be seen for their true selves, rather than as a reflection of their deceased mothers. Most of all, they share a magnetic draw to one another, despite being rivals in their roles as stepmother and stepdaughter.

I loved the exploration of the complex relationships within this novel, especially the one between Mina and Lynet. I found their tumultuous and ever-changing bond beautifully told, whether we see it from Lynet’s first doe-eyed admiration of Mina – or from Mina’s carefully guarded affection for her stepdaughter. There is also a main F/F romance within this book that’s a lovely slow-burn, and I adored that the ladies held together the plot and had agency in every critical decision. Even the women of the history, such as Queen Sybil or Mina’s mother Dorothea, are given significant thematic roles. This is a book where ladies get to explore beyond their assigned fairy tale stereotypes, and I need more of it in my life.

This novel was also written in a beautifully lyrical manner, making the biting cold of Whitespring feel palpable. The dual point of views also comes together and complement one another seamlessly, making me wish we got to see all fairy tales from multiple perspectives. I especially loved the symmetry of the ending, which satisfied me far more than any vague ‘happily ever after’ could hope to.

I read parts of this book via audiobook, and I found the narration very well-done. I think anything fairy-tale related is best heard rather than read, so I thoroughly enjoyed listening to the story. The only thing I found jarring initially was the fact the book shared the same voice actor as A Court of Mist and Fury, so I initially kept thinking I was listening to the wrong book.

If you’re a fan of fairy tale retellings, especially ones where women gain ownership of the narrative, you need this book in your life! Definitely one of my favourite young adult debuts of 2017, and I can’t wait to see more from this author.

12 thoughts on “Book Review: Girls Made of Snow and Glass”