Disclaimer: I received a copy of this book from Date A Book/Netgalley in exchange for an honest review.

NOTE: I read this book as part of #AsianLitBingo, you can find my full TBR here.

When Dimple Met Rishi is like a sip of iced-coffee on a stifling summer day: refreshing, energising, and never fails to put a smile on my face. This endearing romantic comedy explores the whole spectrum of the young adulthood experience with sincerity and humour. Within these pages you will find an honest examination of culture and identity, as well as a thoughtful study on dreams and ambitions.

END_OF_DOCUMENT_TOKEN_TO_BE_REPLACED

Title: This Is Where The World Ends

This Is Where The World Ends is filled with beautiful and haunting writing. Part teenage love story, part whodunnit mystery – it’s enthralling and engaging. However, the characters and relationship fell a little flat for me, robbing the book of its full impact.

Everything ends. This is obvious. This is the easy part. This is what I believe in: the inevitable, the catastrophe, the apocalypse.

Once upon a time, there was twelve princesses. No, wait. There was only one princess, and one prince. They snuck out of the house at night and danced in the moonlight.

Firstly, I would like to say that Amy Zhang can write. I found out that she’s currently in her teens – which is at once astonishing and thrilling, as I can’t wait to read what she pens next. Her proses are simple yet lyrical, cutting you right to the bone with each sentence. With This Is Where The World Ends, Zhang also employs imageries wonderfully – alluding to both fairy tales and apocalypses with poetic ease. Although the book is realistic fiction and strictly confines itself to the contemporary world – the whimsical nature of the writing pushes past these boundaries. At times, it felt like I was reading magical realism, which is one of my favourite genres!

They press and press information, but my brain is liquid. The touch the surface and it ripples and then it goes blank again.

The set up of the plot is also endlessly intriguing. I devoured this book in about two hours in my eagerness to get to the bottom of its mystery. It alternates between two point of views and timeline. Firstly: Micah’s present narrative: desperate to piece together the night of the fire – although his mind has been hopelessly altered by the event. Secondly: Janie’s everyday girl musings of the events leading up to the incident. We also get glimpses of Janie’s fairy tale journal – complete with intricate Skarpie (it’s cheaper than Sharpier!) doodles – and a perfect echo of her chaotic, imaginative and inimitable soul. It was a great analogy for the events in her life – and by the time you finish this book, you’ll understand that metaphors are everything to Janie.

She always kept a marker and a match and at least five rocks in her pocket: the marker to write, the match to wish and burn, and the rock to keep her grounded.

While it should be quite obvious that I was smitten by the writing and the structure of the narrative, the book falters when it comes to characterisation. I truly struggled to relate to Janie – she was a dichotomy: part manic pixie dream girl, part spoilt rich kid caricature. Janie believes in fire and permanent markers and solid rock. Janie believes in art and self-expression. Janie believes that Micah is her soulmate. Yet, Janie is also trapped in the makings of societal expectations. She dates popular jocks and hangs out in what self-stylised ‘convenient friendships’. She refuses to acknowledge Micah’s existence at school. She lives according to the very rules that she despises. Small acts of rebellion aside, Janie was quite the hypocrite. Of course, that was the point and the tragedy of it all – but I just did not find her endearing. I felt that we needed to get into her head space a little more – as I was never truly invested.

Then there’s Micah, who’s passive personality grates me to no end. He simultaneously assumed to role of childhood love, soulmate, and nice guy – always there for Janie but never having his love reciprocated fully. All he gets are stolen moments in the dead of the night, as they played at being Justice around town. Micah constantly allowed himself to be manipulated by Janie – every time he seems to be free from her influences, he slips right back in. It’s an uncomfortable, almost abusive relationship – with Micah being equally at complicit. He lacked his own identity and was constantly being moulded and lead by Janie.

However, just as the book is meandering on about what seems to surmount to a teenage love triangle – the book sucker punches you with its main theme: probably readily apparent to anyone who has looked at the cover in detail. Janie’s tragedy is not confined to an identity crisis or her selfishness – she also becomes a  victim of slut shaming and sexual assault. The book offers no easy way out and solution, instead – we are faced with the full brunt of the ugliest side to high school bullying. It’s difficult and uncomfortable, it gets under your skin. Needless to say, the book is not one for the faint-hearted.

Despite the book’s heavy issues and grand mystery – my conflicting feelings regarding characterisation and relationships meant that I was robbed of the book’s climactic impact. I have the sneaking suspicion the book wanted me at some corner in foetal position by its conclusion – instead, I was dry-eyed and felt somewhat cheated of my emotional catharsis. This book could have been so much more, I wanted it to be so much more!

Aside from my issues with characterisation – I think this is one beautifully written novel. As the issues and character dynamics the novel deal with is so extreme, I think you’ll have to check this one out yourself before passing your verdict.

His obsession.
Her fall.
High school senior Zephyr Doyle is swept off her feet—and into an intense relationship—by the new boy in school.
Zephyr is focused. Focused on leading her team to the field hockey state championship and leaving her small town for her dream school, Boston College.
But love has a way of changing things.
Enter the new boy in school: the hockey team’s starting goaltender, Alec. He’s cute, charming, and most important, Alec doesn’t judge Zephyr. He understands her fears and insecurities—he even shares them. Soon, their relationship becomes something bigger than Zephyr, something she can’t control, something she doesn’t want to control.
Zephyr swears it must be love. Because love is powerful, and overwhelming, and…terrifying?
But love shouldn’t make you abandon your dreams, or push your friends away. And love shouldn’t make you feel guilty—or worse, ashamed.
So when Zephyr finally begins to see Alec for who he really is, she knows it’s time to take back control of her life.
If she waits any longer, it may be too late.

This book was exciting in the ways it challenged our expectations and preconception about the YA genre. I feel privileged to be part of the blog tour. I want to share with you how this book turned tropes around on its head – as well as give you two book-inspired iPhone wallpapers to take away!

5 Ways THE GIRL WHO FELL Destroyed YA Tropes

1.  The Side Characters’ Lives Doesn’t Revolve Around The Protagonist

It’s so often the case in YA that many side characters lose their agency, only fulfilling their purpose in the plot as either a dispenser of advice, or a motivation for the protagonist. We hardly glimpse at their own ambitions and plans. Their only goal seem to be servicing the main character in their story.

Zephyr’s best friend, Lizzie, defies this role. Yes, she’s an excellent friend who dispenses many warnings and advice, always steadfast and loyal. But she also has her own life outside: working towards her goal in becoming a journalist, and dealing with her own long distance relationship. Similarly, Gregg has his own group of friends and his own agency. They both love her, but they also love themselves – and that note made the book all the more authentic. END_OF_DOCUMENT_TOKEN_TO_BE_REPLACED 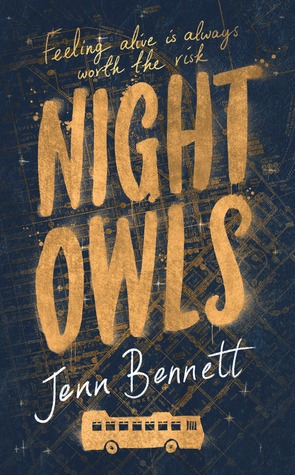 Title: Night Owls (US Title: The Anatomical Shape Of A Heart)

I received a copy of this book from Simon & Schuster Australia in exchange for an honest review.

My opinion of this book changed several times during the read. I alternated between thinking it was adorable and wanting to shake some sense into the characters. Ultimately, the ending of Night Owls placed firm importance on family and love, which means I parted with the book on a happy note.

I prefer the UK cover, but I like the US title better. I AM TORN.

The focus on arts!

You’re no HB. You’re like ten Prismacolours all at once.

Jenn Bennett mentioned in the author’s note that she wanted to celebrate artists: not just the ones in museums and galleries – but every day people and their attempts at self expressions. Both our protagonists are very much defined by their passion for art – with Bex exploring human anatomy, while Jack practices beautiful yet illegal street art. I enjoyed that they both had an identity outside their mutual attraction, and that they found a kindred spirit in one another.
END_OF_DOCUMENT_TOKEN_TO_BE_REPLACED