Disclaimer: I received an advanced reading copy of this book from the Harper Voyager Australia in exchange for an honest review.

From its very first lines, Red Sister had me hooked and wholly invested. It promised warrior nuns, political and religious intrigue, along with a cast filled to the brim with complex ladies. Red Sister delivered on all counts. I especially loved its exploration on relationships between females, from friendship, to mentorship, to rivalry.

It is important, when killing a nun, to ensure that you bring an army of sufficient size. For Sister Thorn of the Sweet Mercy Convent, Lano Tacsis brought two hundred men.

The first lines of Red Sister are some of the most captivating I’ve read in several years, and it sets the tone for the entire book. Mark Lawrence’s writing style is meticulous and vivid, his sentences pulse with life and intrigue. In particular, I love the way he writes action scenes – I’ve admitted several times in the past that I am not a particularly visual reader when it comes to fight scenes, but Lawrence’s writing are cinematic even to someone like myself.  END_OF_DOCUMENT_TOKEN_TO_BE_REPLACED

I have to be frank, the twitter promotion of Truthwitch had me very nervous about this book. I thought, surely, nothing is that good – my cynicism stemmed from a 2015 burned out from hype.  Nonetheless, the day it was released, I sneaked onto Kindle and snagged myself a copy.  My fears were alleviated, Truthwitch was a memorable read – filled with characteres I could root for. While I had minor issues with some of the relationships and plot points, I could see myself becoming a loyal follower of the Witchland series.

The lack of central female friendship in fiction is frustratingly prevalent. We live in an age where movies are still getting a pat on the back for passing a rudimentary Bechdel’s test, for Chrissake!  Truthwitch features a steadfast and crucial friendship between two fierce ladies, for that it won a lot of points in my book.  When it’s hinted that the Classic Chosen One trope has been tweaked in favour of a Chosen pair of friends? My heart can’t take it, where has this storyline been all my life?! END_OF_DOCUMENT_TOKEN_TO_BE_REPLACED 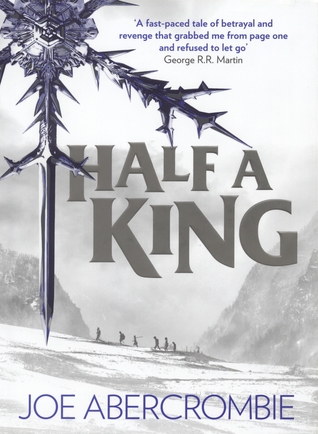 Title:  Half A King

This book has been on the radar for a while, with the last book of the series coming out in August, I finally take the plunge.  Short version:  I loved it!  Here’s why you will, too.

A man swings the scythe and the axe, his father had said. A man pulls the oar and makes fast the knot. Most of all a man holds the shield. A man holds the line. A man stands by his shoulder-man. What kind of man can do none of these things?

Yarvi is the youngest prince of Gettsland, born with one crippled hand, he was trained for a life in lores and herbs rather than to rule.  When his father and elder brother are murdered, Yarvi – who was always told he’s only half a man – must step up and become a king.  Before he is able to appreciate the enormity of leading this warrior nation, he’s betrayed and sold into servitude (I admit, here my mind also wandered towards a Half A King/Captive Prince cross over, haha), and a whole different struggle begins.

“I swore an oath to avenge the death of my father. I may be half a man, but I swore a whole oath.”

My favourite thing about Half A King is definitely its cast of characters and how fully realised they all were.  Firstly, we have Yarvi: who rises above his disability and grows into his own person through the book by relying on his wit.  His rise in a society that values brain above brawns was so delightful to watch.  It also gave me warm fuzzies to see him make friendship in unlikely places and inspire loyalty in the least likely places.  Yarvi’s no typical hero, he had no strength of body nor bravado – but he’s a damn interesting one that you could really root for.  Plus, it helps that he’s totally hilarious! I like my men with a sense of humour.

‘Laithlin, the Golden Queen!’ She spoke the name like a magic spell. ‘They say she’s owed a thousand thousand favours, that a debt to her is a matter for pride. They say her word is valued higher than gold among merchants, because gold may go down in worth but her word never does.’

Aside from Yarvi, I also adored the many strong women featured in the story.  I loved Laithlin, Yarvi’s mother, bargainer extraordinaire in all her manipulative glory.  I loved Sumael and her unwavering sense of direction: both physical and personal.  I even loved pirate and slave owner Shadikshirram and all her swagger.  Can’t wait to see more of these awesome women in future installments.  Other side characters were also well developed, especially the friends Yarvi made during his days as the oarsmen.  Nothing is an especially interesting figure, but the less I say on that, the better for those who have not read the book.