Disclaimer: I received a copy of this book from Hachette Australia in exchange for an honest review.

The following review will contain spoilers for the first book, Strange the Dreamer (which I have reviewed here). There will be no spoilers for Muse of Nightmares.

Laini Taylor is a wordsmith and a weaver of dreams, she never ceases to amaze me. This duology will go down as my all-time favourite, sharing the throne with The Orphan’s Tales Duology and Six of Crows. 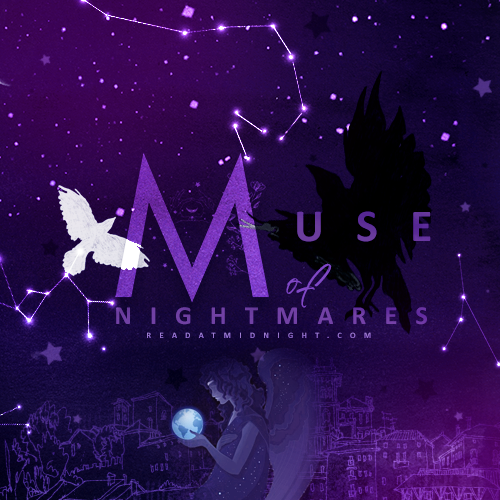 As long-time blog readers might remember, Strange the Dreamer was one of my favourite reads of 2017. Within the first few pages, I was captivated by Lazlo’s dreams, Sarai’s musings, and the magic of Weep. If the first book in this duology was a languid and indescribably vivid dreamscape, then Muse of Nightmares was a triumphant awakening into a reality equally monstrous and fantastical. To me, Muse was pitch-perfect from beginning to end, marked by Laini Taylor’s inimitable lyrical prose and enviable imagination.

Strange ended with a heart-stopping and utterly cruel cliff-hanger, and much of Muse leaves the reader tethered to that self-same cliff. The question of what Minya will do with Sarai’s soul haunts these pages – creating a litany of moral dilemmas and suspenseful crisis. In Muse, we see Lazlo and Sarai pushed to their limits in every sense. The character development they undergo in this book is phenomenal, and Lazlo has especially endeared himself to me and cemented his status as one of my favourite YA hero of all time.

One of the most remarkable things about Muse is the complexity in its villainous characters. Minya’s portrayal was especially nuanced, the writing allowed me to feel the spectrum of her emotions: her fury and her fears were laid bare for the readers to ponder. I won’t speak too much of the other antagonist in Muse for spoilery reasons, but I found her characterisation equally powerful, with her motives ringing with heartbreaking truths. I love that Muse allows room for all of its women to be angry, to be flawed, and to be utterly human even when they wield the power of gods.

There are many characters in the cast who suffers from PTSD, crush by the shadow of the Citadel and the memories of Skathis’s cruel reign. The repercussions from events which occurred decades, or even centuries past still holds weight and influence the choices of these characters. Muse takes us through the highs and the lows of all of their emotions, I felt both drained and empowered by the end.

With Muse, we get a further dive into Laini Taylor’s vast and alluring universe, and certain revelations has me clamouring to go back and read everything the author has ever written. There are seraphim and false gods, mayhem and magic, hopes lost and regained. In the rich fabric of this world, there lies a story about family and humanity that is timeless and true. The book’s ability to portray both the supernatural and the human within the same breath leaves me in awe, and makes the magic within all the more potent.

I know that many readers found the pacing of Strange to be slow and difficult to follow. I am happy to report that pacing wise, Muse is unputdownable. I read the book over a red-eye flight at midnight, and I barely got any sleep because I had to know what will happen to all of my favourite characters. The book deftly shuffles between the current events of Weep, and a pair of twin sisters at an unknown time and space. Piecing their stories together and watching it unfold was incredibly satisfying. The final quarter of the book had me literally biting my nails and left me breathless. Even long after the last pages are turned, I am still thinking of the world and wonders within this strangely beautiful universe.

I declare it’s an imperative that all lovers of monsters and magic read this duology immediately. Read Laini Taylor’s entire backlist while you are at it. If you’ve read these books, come gush with me in the comment section!