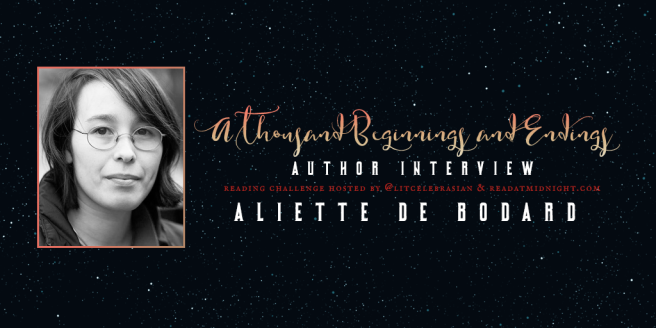 My most anticipated short fiction anthology of the year, A Thousand Beginnings and Endings, is out this week. As you might remember, I am hosting a reading challenge in conjunction with LitCelebrAsian to celebrate all of the authors involved in the anthology. It is my absolute privilege to share an interview I did with Aliette de Bodard today. She contributed a retelling of Tấm and Cám, a Vietnamese fairy tale I grew up hearing.

1) What drew you to the story of Tấm and Cám, why did you want to retell this tale in particular?

For me, Tấm Cám is such a seminal Vietnamese tale, and it had a huge impact on me as a child–not so much the first part, which didn’t feel very distinct from Cinderella at the time, but the series of Tấm’s deaths and reincarnations and how she always struggles to come back to her husband no matter what shape she’s in. At the same time the familial dynamics always bothered me (as in many fairytales) because they pitted sister against sister (and not in a particularly charming way since the darker-skinned sister is the evil one). So when I retold it, I wanted to change this; and rather than have the story be about a wife striving to reach her husband, be about a sisters trying to reach each other and find a life together!

2) You have written both short fiction and novels, are there any differences in how you approach writing them?

I think it’s mostly a matter of degree? Short stories are punchier and can afford to be about a single point or a single character, whereas novels have to be more textured and richer because there is more space (even if you do focus them on a single character, the extra space means more space to explore them, or more plot happening to them, so it’s a different thing?). I tend to approach both the same way, which is to outline and then write according (mostly!) to the outline, but with novels it’s an endurance rather than a dash process–I’m in it for the long haul, whereas with short stories I aim for something that’s sharp and memorable in a short space!

3) Readers are looking forward to reading all of the Asian stories in this anthology, could you recommend us some books by Asian writers not featured in the anthology?

Let’s see… Ken Liu’s The Grace of Kings and other Dandelion dynasty books, which are an epic fantasy based on Chinese history in an island setting and feature a cool cast of characters plus amazing engineering feats, Jeannette Ng’s Under the Pendulum Sun, an amazingly creeping Victorian missionaries in Fairyland with gorgeous and scary set-pieces, Malinda Lo’s Ash, which is a queer retelling of Cinderella that’s such a comfort read for me, and Liu Cixin’s Three-Body Problem, which does sense-of-wonder SF on a large scale.

4) I love the Cooking the Books podcast you co-host with Fran Wilde. Could you share with us a dish (or recipe) that comes to mind when you think about Tam and Cam?

One of the dishes I think the girls would have enjoyed is thịt khô tàu (caramelised pork belly and eggs), which is a staple Tết (New Year) dish in the South of Vietnam, and involves pork belly, fish sauce and a long cooking time that really makes the meat melt in the mouth. The recipe is on my blog.
Aentee’s Note: thịt kho tàu is one of my favourite comfort dishes! Definitely try this one if you love a hearty braised pork belly.

Hahahaha I imagine The Shadow’s Child from The Tea Master and the Detective would get on surprisingly well with Asmodeus from the Dominion of the Fallen books: one of them is a living spaceship and the other one is a Fallen angel with rather too much taste for knives, but they both have a deeply cynical and sarcastic outlook on life and they’d be trading quips until the world ended! Conversely, Long Chau from Tea Master and Lucifer Morningstar from Dominion of the Fallen would probably be at each other’s throat because they’re both equally arrogant and with a tendency to pontificate, but where Long Chau is really fundamentally a good person who does her investigations to solve people’s problems, Morningstar really only cares about himself, which I imagine would annoy Long Chau no end.
Aentee’s Note: If you’re looking for an entry point into Aliette’s works, there is no better place than The Tea Master and the Detective for short fiction, and The House of Shattered Wings for novels.

6) What were some of your favourite books/movies/tv shows growing up? Which were the most influential to your own writing?

I think the single most influential things were the fairytales my maternal family (and especially my grandmother) told me, which were a mix of Vietnamese and Chinese folklore, so in my mind I have a wealth of images of swords under lakes, fishermen’s songs, dragon palaces under the sea and poor mothers raising their sons to be scholars. I absolutely loved Star Wars, but I mostly retold the stories to myself with lone Jedis saving the world from evil in the grand tradition of wandering nuns and monks, and having to struggle with the proper responses to morally grey characters (I thought the system as it was was a little too starkly binary and facile). Other books that were fundamental are Terry Pratchett, whose grasp of humanity is stellar, as is his love for people who aren’t kings or lords, or usually the subject of epic fantasy; David Gemmell, who writes fast-paced epic fantasy with surprising depths; Ursula Le Guin, whose Wizard of Earthsea was absolutely foundational (the scene where Ged reunites with his shadow still gives me shivers); and Takeuchi Naoko’s Sailor Moon, which had those amazing women teaming up to fight evil while juggling school duties and families.

7) What can readers expect next from you?

I’m currently working on book 3 of Dominion of the Fallen, which is still going to be set in the same Gothic Paris devastated by a magical war, and feature the return of several familiar characters as well as new ones. It’ll be focused on House Harrier in the Southwest of Paris, and on the disastrous consequences of a magical event across the cities. Otherwise, I’m hoping to release in the new few months a self-published novel in a new universe, an f/f retelling of Beauty and the Beast where an impoverished scholar falls in love with the dragon she’s indentured to.
Aentee’s Note: I am absolutely here for whatever Aliette publishes, but the f/f Beauty and the Beast retelling with dragons is everything I never knew I needed.

I hope you enjoyed this interview! What is your favourite story written by Aliette de Bodard? If you haven’t had a chance to read her works, which are you planning to start with?