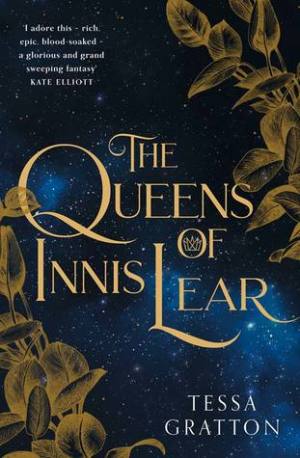 Title: The Queens of Innis Lear

Disclaimer: I received a copy of this book from Harper Voyager Australia in exchange for an honest review.

I still vividly remember studying King Lear for Year 11 English class, for me, it’s Shakespeare’s most memorable tragedy. I spent many hours that year writing about the folly of men in power and the toxicity of patriarchal societies, so I was immediately intrigued when I learned of this feminist retelling of King Lear.

This book is takes a deep dive into the mythology of King Lear and imbue it with facets of its own. It reinvented not just one or two characters from the original tragedy, but gave every single player an in-depth examination. The exploration extended far beyond the characters themselves, the book also conjure a fully imagined Innis Lear and Aremoria, these lands filled with their own traditions and cultural touchstones. Tessa Gratton obviously spent a great deal of time and energy in carefully constructing this world, it feels palpable and real.

I appreciated that the women portrayed in this book were varied yet equally complex. From the unyielding and kingly Gaela, to the cunning and manipulative Regan, to the honest and guileless Elia, they’re all so much more than the characters who originally inspired them. There are also multiple other women of significant in the new text, such as Brona the wood witch and Aefa, her daughter and Elia’s loyal companions. The web of their interaction is fraught with tension and incredibly intricate, layered with subtext and a painful history.

The text shifts between the current events, which closely follow that of the original play, and flashbacks to numerous points in the past. It’s with these flashbacks that The Queens of Innis Lear introduce a compelling twist to the narrative, with the invention of Dalat, Lear’s wife and the princesses’s mother. Many of the conflicts within the novel arise from the circumstances around Dalat’s death, which Gaela and Regan perceive as Lear’s doing due to his myopic and stubborn faith in the stars. Dalat is a woman of colour hailing from the Three Kingdoms, the subtext hinting that Innis Lear doubted her legitimacy as Queen added more scope to the narrative tension.

I also liked how the book was not afraid to go to dark places and make difficult decisions. None of the characters in The Queens of Innis Lear are likable, but their motives were always compelling. My 16 year-old self also cheered at the text’s criticism of King Lear, who’s pride and lack of empathy set the tragedy in motion to begin with. I found the conclusion of this novel well-earned and a lot more satisfying than the original play.

This book was beautifully written, with vivid descriptive imageries that made the world feel as real as ours. Some of the lines from the original found its way into this novel, and it never felt out of place. It was gorgeous from its stunning prologue to the last haunting words. However, I found the pacing a slog, and I felt the book could have been edited down to 2/3rd of its size. I had to pause myself from wanting to skim read on numerous occasion.

I also had issues with the book’s definition of what constitute a ‘whole woman’, as the characters in the text constantly made references to Gaela and Regan’s respective infertility – and how this would make Elia a better ruler as a consequence. Although the book is purportedly a feminist retelling, it falls into the trap of punishing ambitious women.

I think you’ll get infinitely more out of this book if you have at least a passing knowledge of King Lear, even if it’s just from a Wikipedia search.

3 thoughts on “Book Review: The Queens of Innis Lear”