I am honoured to host the first stop in the Australian The Diabolic Blog Tour. Today, S. J. Kincaid will be sharing with us her Diabolically awesome playlist.  I love listening to music that inspired or aid the author in the creation of their book, it makes for such a visceral and immersive experience reading experience.

When I was conceiving Nemesis’s character, expanding on that girl I’d written only a single page about and wanted to know more, I was listening to this song and suddenly had this image of an immensely powerful, athletic woman charging down a hallway. That helped me figure out just what Nemesis would be, and what a Diabolic would be.

(Aentee’s notes: I love this song, it’s totally my summer anthem. The lines ‘Where there is desire, there is gonna be a flame. Where there is a flame, someone’s bound to get burned’ captures one of the pivotal relationships in this book so perfectly!)


“Smiling out of fear” is the line that really stuck with me in this song, as Nemesis is heading into a royal court presided over by a dangerous Emperor who thinks nothing of killing his foes. One thing I remember reading about was Joseph Stalin passing idle evenings in his dacha with those ‘friends’ of his he was about to purge, and the way his friends would be terrified for their lives, yet still trying to endear themselves to him up until the moment he turned on them. The greatest tension I can imagine would be in a place where one fears for one’s life, yet still attempts to be pleasing.

(Aentee’s Notes: Absolutely love the reason S. J. Kincaid picked out this song. I think the line “But my head’s filling fast with the wicked games, up in flames” is also especially fitting for The Diabolic)

All About Us- He is We


At the end of the day, Nemesis first cares only about Sidonia, and her entire objective is this other person. Sidonia shares a powerful connection with Nemesis in turn, and so this song brings that to mind.

(Aentee’s Notes: No lies, I was ready for this boo to turn into a full blown Nemesis/Sidonia romance and I think most readers will agree with me.)


This song is just EPIC. I hear it and I get chills down my spine, so I want to write epic stuff. Whether I succeed in writing epic stuff to it is up to debate, but it does get me in the mood to write about people presiding over the fate of a galaxy.

(Aentee’s Notes: I don’t think anyone will dispute that Hans Zimmer is a genius at composing some of cinema’s most expressive and stirring music – like S. J. Kincaid, I get chills whenever I hear this track)

Every single story I write set in the future, I end up playing this song a lot. Not sure why. The energy of it just feels right.

Everybody Wants to Rule the World – Lorde


THE DIABOLIC centers around a struggle for supreme power, so naturally this song is one that comes to my head. There are several different characters contending for control over the throne of a galactic Empire.

(Aentee’s Notes: Legit this entire song works for The Diabolic, but I especially love the lines ‘It’s my own design. It’s my own remorse. Help me to decide. Help me make the most’).

Paint it Black- The Rolling Stones

I’ll always associate this song with darker thoughts, and Nemesis is very much a character with an inner darkness that colors her perspective of everything she sees, everything she perceives.

World Outside- The Devlins

This is a song I first saw in a promo for THE SOPRANOS and for some reason, like ‘Time’ by Hans Zimmer, it just seems epic to me. It gets me in a mood where I want to write something big and sprawling with world changing consequences.

Intrigued? Check out more information on The Diabolic and where you can enter a giveaway below! 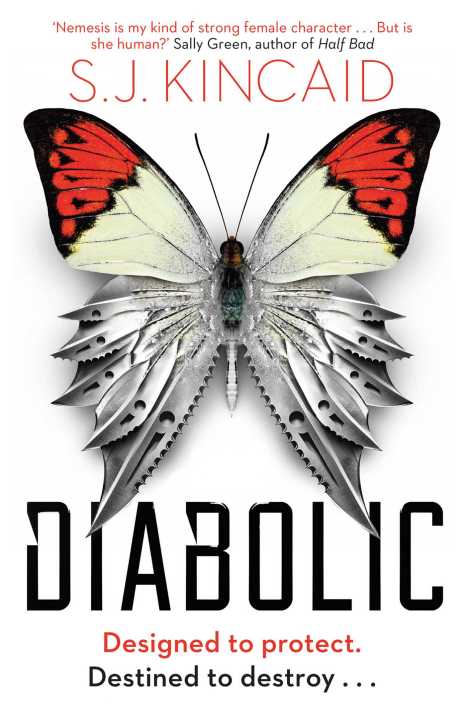 A Diabolic is ruthless. A Diabolic is powerful. A Diabolic has a single task: Kill in order to protect the person you’ve been created for.
Nemesis is a Diabolic, a humanoid teenager created to protect a galactic senator’s daughter, Sidonia. The two have grown up side by side, but are in no way sisters. Nemesis is expected to give her life for Sidonia, and she would do so gladly. She would also take as many lives as necessary to keep Sidonia safe.

S.J. Kincaid was born in Alabama, grew up in California, and attended high sch
ool in New Hampshire, but it was while living beside a haunted graveyard in Scotland that she realized that she wanted to be a writer. Her debut, Insignia, came out in July of 2012. The second book in the series, Vortex was released in July of 2013. The final book in the trilogy, Catalyst, came out October 28, 2014. Her standalone novel The Diabolic will be released in fall 2016.

Finally, check out the other stops on this tour! The participating Aussie blogs are featured below: 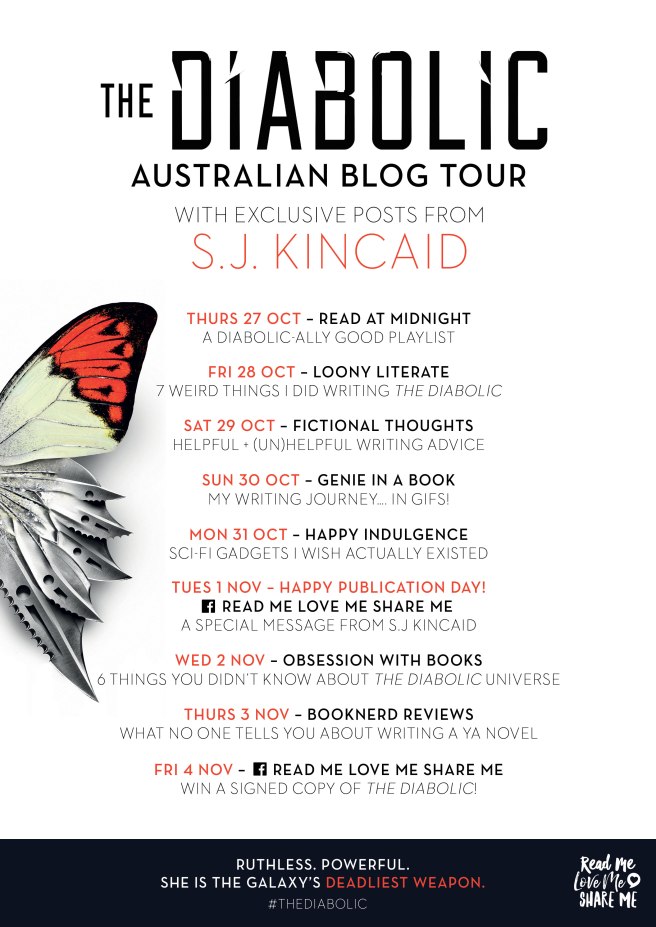