Disclaimer: I received a copy of this book from Allen & Unwin/Bloomsbury Australia in exchange for an honest review.

Needless to say, after finishing Queen of Shadows last year, Empire of Storms became one of my most anticipated books of 2016. I was over the moon when I received it, and despite its hefty size, I devoured the entire thing in three days in between working full time. Currently, I am still reeling from the emotional punches the book delivered, but I will try my best to deliver a coherent review. This will be completely spoiler-free for Empire of Storms, but will contain spoilers for its prequels. 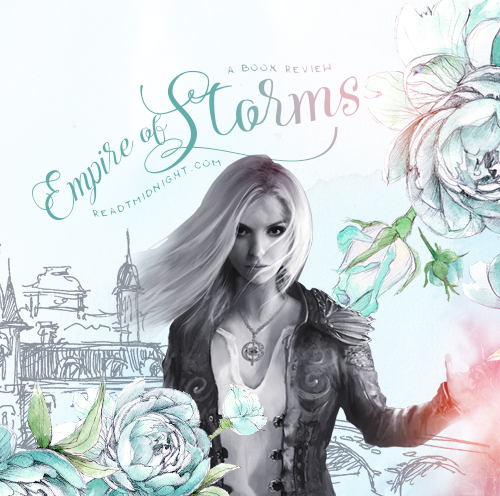 I keep coming back to this series time and again because Sarah J. Maas is the master of page-turning action and wringer of my heartstrings. Empire of Storms is no different, filled to the brim with engaging action, careful plot twist, and amplified emotional drama. I would highly recommend reading this book over a couple of days off, as I had troubles putting it down from beginning to end.

Empire of Storms is also the book where we begin to see Sarah J. Maas’s master plan for the series fall into place, with appearances from both old friends and foes. I had always felt that the first two books of the series were disparate in both tone and spirit, making me question the fluency of the series when viewed as a whole. With this book, the issue is resolved as the plot threads left all over the series begin to tie together. The intertwining of all the narrative arcs in this book was immensely satisfying, and made me want to reach to my shelf and reread the series again from the beginning.

While we got to see familiar and well-loved faces in Empire of Storm, the book also treats us to insights to characters previously left on the sideline. I have always marveled at Sarah J. Maas’s ability to quickly develop relationships, both romantic and platonic, that I become wholly invested in. There are times in this book where I was moved to tears by characters I formerly did not care for. With every book, I love the huge cast of character a little more – and I am already mourning that I will have to say good bye to everyone in 2017 whe the series concludes.

Following the fashion of the rest of the books in the series, Empire of Storms continue to follow a multitude of point of views – treating us to numerous perspective on Aelin’s perilous journey to rebuild her kingdom. The book felt more focused than its predecessors, being honed in on Aelin’s story in particular and taking little asides to other parts of the kingdom. Consequently, some of the previous regulars received little to no page-time in this novel. While I was disappointed by the disappearance of certain characters, I have a strong feeling that we will get to see the full cast in all of their glory in the final novel – and I am willing to be patient.

Aelin absolutely shines in this novel, I grow to love her more with every passing book. While she has matured and grown into a role as the Queen of Terrasen, she also retained that Sardothien swagger and sharp-tongue. What I enjoyed the most was seeing the relationships she has forged over the years, and the length she would go to in order to protect those she loves. Although she continues to develop into the kingdom’s most powerful wielder of magic, she still retains the vulnerabilities and humanity that made her so relatable from the beginning.

Love continues to be the dominant force that drives the series, alongside with Aelin’s momentous task. As such, we are treated to an array of budding and developing romance over the course of this novel. At times, I felt that some of the pairings were unnecessary – I personally believe that a character can be happy and whole even in the absence of romantic love. Regardless, I have my shipper’s hat firmly on for a certain new pairing, they became the source of both my joy and my tears for much of this book.

Don’t mistake the abundance of romance for saccharine and safety, though. War is at hand, and this book went to very dark places. It’s definitely the most brutal and bloody of the Throne of Glass series, with numerous scenes that left me in a panic for the fate of some beloved characters. Sarah J. Maas does not pull any punches here, and we are treated to the full brunt of every difficult decision, every single act of violence.

Speaking of tears, let me tell you that fans of the series will not emerge this novel unscathed. By the end of the book, the plot, the characters, and their individual relationships, had reeled me in so completely that I spent the entirety of Sunday dazed. Some part of me wished that I discovered the series after it finished, so I would not have to deal with waiting in agony for September 2017. For now, I will content myself with rereading everything.

If you’ve read the Empire of Storms, please be mindful about posting spoilers when you’re commenting on my blog. I want everyone to be able to enjoy it at their own pace!