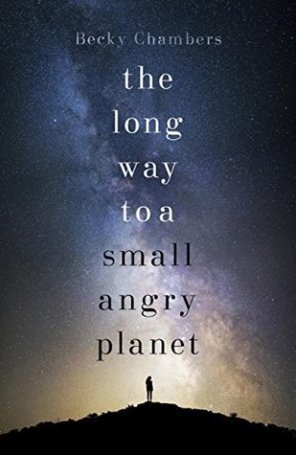 Title: The Long Way To A Small, Angry Planet

Be Warned: I love this book so much I don’t think I can be trusted to be coherent or impartial in this review. The flawless Kynn of Diva Booknerds recommended Small Angry Planet to me last year – as I trust her in all things bookish I purchased it, and it’s been sitting around on my Kindle for months on end. I want to go back and smack my past-self for ignoring this gem of a book for so long. Small Angry Planet is one of those rare books that has both heart and brain, capable of making you think and feel for a long time after its last pages.

I don’t read a lot of science fiction, but I do love the genre for exploring contemporary issues in a different setting. Not to mention that space is boundless in its ability to inspire, and the vastness of the unknown is ceaselessly intriguing. Small Angry Planet captures all of the things I love best about the genre, and further delivered a human (or should I say, sapient) warmth to the story. This is science fiction at its most approachable and intuitive. I could ramble senselessly forever, but here’s a list of why I love it so much:

My point, fellow representatives, is that Humans are a fractured, limping, adolescent species that has branched out into interstellar life not by merit, but by luck. They have not moved beyond intraspecies chaos.

I can’t simply call this world-building when there’s an entire univese, with a multitude of spaceships, planets and alien species to consider. Based in a distant future where humanity has either colonised Mars or lead nomadic lives in spaceships scattered across the galaxy – the tables are turned and humans are no longer the most powerful being of our known world. Instead, we learn all about the more powerful species of the Galactic Commons. From the tactile and reptilian Aandrisk, to the graceful and silent Aeluons, to the wealthy and influential Harmagians – each of these species are explored in great details. We also get to see how humans have segregated and reunite after the losing Earth, and how other species may view us.

The world pushes at the boundaries of our expectations and challenge our bias. At the core of the vast universe is the resounding theme of tolerance and acceptance.

‘Do not judge other species by your own social norms.’

As mentioned above, I love the highlighted theme of prejudice in this book. In this extremely diverse world, humans have to learn to adapt and assimilate with a multitude of cultural, biological and ideological differences.

It’s hilarious to see humans consider Harmagians hideous, and have them think the exact same. It’s wondrous to see Dr. Chef – who’s idea of gender is fluid because in his species, it’s dictated by how old you are. It’s mind-boggling to see Sianat Pair, a species infected by a virus which gives them unfathomable spatial aware, referred to as plural instead of singular. It’s reassuring to see the themes of love resonate across species and gender boundaries, a world where you’re taught to actively weed out your prejudices. We continue to see this topic explored in the way our cast of characters interacted with one another.

They are all my precious and I love them all! Small Angry Planet is first and foremost, a character-driven story. Focused on the motley crew aboard the Wayfarer, it highlights the relationship and bond which develop while they undertake their biggest job yet: to punch a path into previously uncharted territory.

While the plot may sound grand, what’s the most delightful is seeing the characters living their day-to-day life aboard the ship, and learning about this universe as we go along. I wish ardently that there will be a spin-off book or TV show, just based on these guys hanging out and being awesome. With the cast we have:

Rosemary: The newest addition to the Wayfarer, acting as their clerk. As this is Rosemary’s first trip out of Mars into the vast universe, she acts as our eyes and ears during the trip. It was a delight sseeing her come into her own throughout the novel.

Sissix: A.K.A. my favourite. She’s an Aandrisk who’s found home amongst these odd humans. Their species is sensual and physical, making for some truly hilarious yet eye-opening scenes. Their perception of family is also vastly different from ours, making for some startling challenges. I love her for her perceptiveness and kindness, not to mention she’s one heck of a charmer.

Captain Ashby: The glue that holds our crew together, the steadfast and loyal captain who desperately try to do right and defy humanity’s bloody legacy.

Dr. Chef: One of the last surviving members of his species following a genocidal civil war – he remains kind-hearted and gentle. I mean, the man is a doctor and a chef rolled into one, he’s pretty much awesomeness personified.

Kizzy & Jenks have to be mentioned together, as these two mechanics are joined by the hip. I love their friendship, and I love how their attitude – their life is one giant finger to societal norms.

There’s also minor characters: Corbin, the difficult to love yet brilliant algaeist. Ohan, the proud and reclusive Sianat Pair. Lovey, the lovable AI controlling Wayfarer – they all get their own storyline and never lose their own voices. This crew is pretty much #squadgoals and I love them forever.

To be honest, the plot features very little in this book – don’t go into it expecting action. Here’s what you’ll get instead: a wondrous new universe, self-analysis of your own prejudices, and a warm afterglow. Read it, I beg you!

33 thoughts on “Book Review: The Long Way To A Small, Angry Planet”