Confession Time: I’ve been obsessed with this book ever since I heard of its premise – it promised to weave Persephone/Hades with the Indian epic Mahabharat. I did all the illogical fangirling thing: stalking the author’s twitter, making an excess amount of graphics, pouring over the internet for reviews and quotes, anxiously waiting by my mailbox for my preorder.

When I learned that Roshani Chokshi considers Catherynne Valente (my favourite author, ever, as you might have heard me mentioned repeatedly) my expectations only skyrocketed. For someone who’s left largely skeptical by hype, I was uncharacteristically 100% committed this particular bandwagon.

“I wanted a love thick with time, as inscrutable as if a lathe had carved it from night and as familiar as the marrow in my bones. I wanted the impossible.” 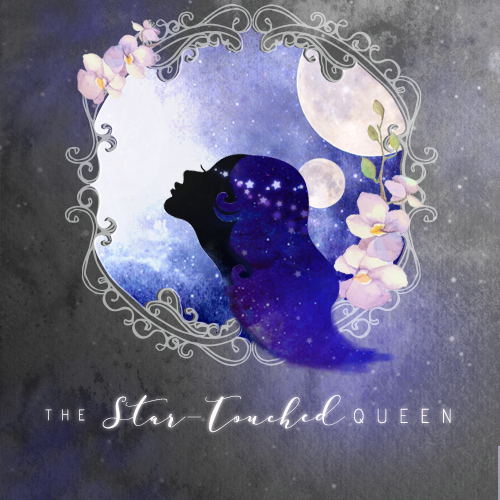 In short, I cannot be trusted to be completely fair in this review. The book largely met my absurdly high expectations, which is a marvel in itself. The world is richly imagined, each description absolutely arresting and evocative.

I dreamed of locked doors and baying hounds, rooms that were night-dark and a beast-king that smiled and laughed around a mouthful of broken stars to sing one phrase over and over: I know the monster in your bed.

I could go on about the power of the imageries in Star-Touched Queen. I’m by nature not an incredibly visual reader, I think this is why I latch onto writers of ornamental prose with particular fervour. We start the story in the harem where Maya grew up, the descriptions rich of sumptuous fabric and ivory screens. Then we move onto the more fantastical Night Bazaar, with its menagerie of legendary creatures and ensnaring market stalls. Next, we have Amar’s halls, filled with whispered secrets and endless doorways. Each of these settings were drawn lavishly, and I especially love that the metaphors employed often made allusions to the book’s Indian setting – with this ‘turmeric skies’ and ‘dreams sweet as rasmalai’.

The book delivered on its promise of fusing multiple narratives from around the world. I love that the Indian elements were especially strongly represented in this book. The mythologies mentioned weren’t mentioned just by name, we also delved into the core of each founding tale, drawing new worlds and ideas from it. The subversion of the classic Hades/Persephone dynamic was especially delightful, as I will further discuss below. There are also traces of other folklore, such as Maya’s quest through Amar’s halls reminding me of both Bluebeard and Beauty and the Beast. Writers developing their own mythology from the existing foundation is one of my favourite things to read.

Although I am a huge fans of such retellings, in general, I find stories such as Hades/Persephone or Beauty and the Beast largely problematic. Innocent maidens in need of rescue never make for a good story, in any case. Maya was a refreshing breath of fresh air, Amar moved her with promises of independence and power – not with his chiseled cheekbones or irreconcilable circumstances. Maya was given agency and choice every step of the way, and they were true equals. This is less a love story, but a story of self-discovery and awakening for Maya.

Come with me and you shall become an empress with the moon for your throne and constellations to wear in your hair. Come with me and I promise you that we will always be equals.

Speaking of Amar, man can that guy talk., because a pick-up artist could learn a thing or two from this hero. Although he remained largely mysterious throughout the book, the text illustrated the force of his passionate love succinctly. Without spoiling too much, I will say that there are threads of memories and identity weaved into the tale of their romance – making it at once compelling and magnetic. However, I do have to admit that the book felt weakest when it was focused on romance – I was much more interested in Maya’s discovery of her worth and her power.

I know emptiness, I know the taste of blood against my teeth. I know what it is to fill your belly with iron. I know hunger. I know pain. I know memories that won’t stay.

In books with a heavy mythic or folklore influence, I often find it difficult to form a connection with the cast of characters, especially with the side characters. This book proves me wrong on that count, with a couple of intriguing appearances. My favourite has to be the bloodthirsty, eternally hungry, and irreverent Kamala – now there’s a steed suitable for a queen. I also adored Gauri and the connection she had with Maya, and hope that we will be seeing a lot more of her tenacity in the future. On the other hand, I found the villain of this piece a little lacking in comparison to our protagonists. Their motivation and plans seem too simplistic for this otherwise excellent novel.

Verdict? I love it, and I still cannot believe that this is Roshani Chokshi’s debut novel, the lady is a veritable wordsmith! I am so glad the genre has such a vivacious new voice, and will be looking forward to whatever she writes next!

Have you read The Star-Touched Queen? What were your thoughts?

I have a big graphics post coming later this week based on the book! Keep your eyes out and subscribe to my blog if you haven’t already, it will make my day!