I received a review copy of this book from HarperCollins Australia in exchange for an honest review.

Passenger and I had a good start, but the slowpacing and directionless plot lost me towards the end. Nonetheless, I could recommend this book based on the merits of the well-developed characters alone. 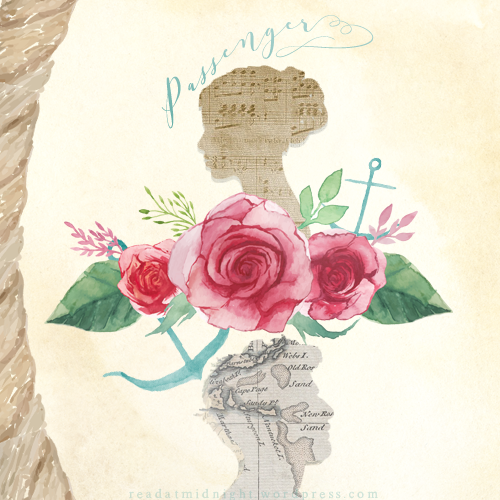 Touted as one of the most awaited time travel release this year, it’s little wonder that Passenger struggled to live up to immense expectations – such is the curse of a hyped book. The mythology behind the time travel is vague, with protagonists leaping through wrinkles in time that allow them to transcend spatial temporal boundaries. There are no apparent rules which dictates where the portal are or where they may lead. Our leads haphazardly uses musical notes to locate these wrinkles in the fabric of the universe – poetic, yet admittedly unpractical.

“This was the danger, the seduction of time travel, she realized—it was the opportunity, the freedom of a thousand possibilities of where to live and how to start over. It was the beauty open to you in your life if you only stopped for a moment to look.”

The time traveling aspect is also robbed of any significance when paradoxes are hand waved aside by convenient rules. We are told when someone alters the course of events, they become stranded in that timeline, effectively dead to their current universe. Although there are hints this will be explored in future installments, for a 400+ pages novel, Passenger is short on even basic explanations. Instead, the time travel is treated as a wish fulfilment vacation bonanza. Our heroes traipse through beautiful places and significant historical events: luscious and undiscovered Cambodia, the once grand Damascus, London and Paris during WWII… apparently portals do not exist in mundane locations.

On the one hand, this whirlwind adventure allowed for some gorgeous settings. However, on the other, it feels superfluous – with some scenes seeming to come out of someone’s Pinterest dream vacation rather than adding anything to the plot. Etta and Nicholas don’t seem to achieve much at numerous of these locations (in Cambodia, they literally encounter a tiger and then leave). The plot thus became undisciplined and aimless. A critical flaw, when you compound it with the already slow and burdening pacing. The characters, while endearing, falters the carry the book on their own.

“What a privilege it was to never feel like you had to take stock of your surroundings, or gauge everyone’s reactions to the color of your skin.”

Despite its flaws, I had some reasons to enjoy Passenger. First and foremost: Etta Spencer. I knew it was love the moment we met. Raised in 21st century New York, Etta is a fiery and determined violinist – not afraid to voice her opinions. I liked that she didn’t immediately become awesome at everything, and was left to floundered and survive on guts and wits alone when she got dropped into the time travel shennanigans. I especially loved her scenes with the pirate crew during her time in the Atlantic ocean – it was so charming! Although I did quickly grow weary of her constant 21st century sensibilities being shocked by the racism and sexism of the time. Once or twice, it might have highlighted the privileges of our era – but when I see it every second page, it just becomes repetitive.

“They won’t expect it from you,” she continued, “and, fool that I am, I didn’t either. Good for you. I like a fighter. But it won’t do you much good against me.”

Another thing I enjoyed was the complex relationship between Etta and Sophia. I know a few of my blogging friends were aghast at the my suggestion that I shipped them – and advised that I would change my mind by the end of the novel. Regardless, I still found these two incredibly interesting, theirs is a dynamic I don’t often see in fiction. Sure, they may not be on the best terms – but they had a grudging respect for one another. They’re both strong in their own ways, they interactions have little relations to the main male protagonist. So, yes, Sophia may be antagonistic, but I loved her scenes with Etta.

“She didn’t need a protector or a rescuer. But she did need him.”

The romance in this book was sweet and earnest, though I personally felt their relationship advanced to the ‘love’ stage far too fast. By the end of the book, the two were definitely 100% devoted, to the point of risking their lives for one another. Although they shared many sweet moment, I can’t help but think this happened way too quickly – although admittedly most of the 400+ pages were centred on their romance. They did have chemistry, though – and it’s one of those rarer romance where both are nice, decent people. Nicholas is one of those YA heroes you would approve your daughter dating in real life.

As mentioned above, a lot of my frustration with Passenger was in the pacing. Although it was off to a rollicking start with pirate ship adventures, and we quickly met the villain of the piece – the plot slowed right down once Etta started time traveling in earnest. I took over a week finishing this book, because the last 300 pages held very little tension and momentum. Nonetheless, the book did end with a couple of action filled chapters, and an intriguing cliffhanger. I am still eager to check out Wayfarer when he comes out next year.

What has your experiences been like with this year’s crop of time travel fiction? Love them? Hate them?  Please share your recs below :D!