I received a copy of this book from Netgalley and Pan Macmillan Australia in exchange for an honest review.

I am happy to announce that Tower of Thorns is a superior sequel in every way. While I enjoyed Dreamer’s Pool, I felt it was slightly different from the usual Juliet Marillier books that I’ve grown up loving. With Tower of Thorns, we go back to her roots with magic, fairy tale and true love. 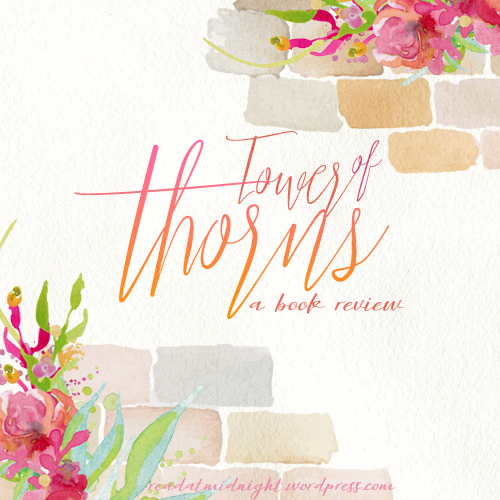 The Blackthorn and Grim novels operate on two levels. First, it focuses on the personal growth of Blackthorn, as well as her developing partnership with Grim. Secondly, there’s a monster-of-the-week type side story that head spear each book, narrated by a lord or lady that Blackthorn is assisting.

Monster in ancient tales were often a disconcerting mixture of man and creature… But in my book, the vilest and worst was the human monster.

Thematically, the book continues the fairy tale retelling tradition of its predecessor. While Dreamer’s Pool took its inspiration from The Goose Girl; the story in Tower of Thorns has elements of Briar Rose. In both cases, Juliet Marillier skilfully twisted familiar storylines and delivered them to us in refreshing ways. Older fairy tales weren’t all sunshine and rainbow, in Tower of Thorns, we are presented with the darkest aspect of storybook fancies. There’s a desolate, abandoned towers. There’s thorns. There’s a curse, brought about by love gone wrong. As I am a huge fan of darker fairy tale retellings, the route this book took managed to keep the side plot fresh and exciting.

Every ancient tale has truth at its heart,” I said. “That’s what I’ve always believed, anyway. But after years and years of retelling, the shape of those old stories changes. What may once have been simple and easily recognized becomes strange, wondrous and magical. Those are only the trappings of the story. The truth lies beneath those fantastic garments.

Another thing I found enjoyable about the book is how it subverts the happy ever after trope. While the story remains deeply rooted in fantasy, it also has a touch of realism in the way it challenges the expectations of folk tales. Both the villain and the protagonists of this piece questions the presence of true love and the presence of fortunes which favour the young and the brave. I love that the book does not offer easy answers, there’s no true love’s kiss or fairy godmothers to magic away all the problems. The darker twist grounded in reality set the tale apart.

There is no such thing as love. Passion, yes. Possession, most certainly. But love? It exists only in the soft minds of human men and women. Love will not save your young man.

Grim who had stood by me when I was at my worst. Who, in the foul days and nights, had always called me Lady, as if I were above it all. Grim who had saved me from myself, over and over.

Speaking of true love, I also adored the juxtaposition between the pure partnership between Blackthorn and Grim VS the more lust-filled love at first sight featured in Lady Geleis’s tale. I was a little bit disappointed by Dreamer’s Pool due to the relative lack of romance in comparison to Juliet Marillier’s previous works. However, I think even in the absence of heavy romantic undertones, the friendship and trust between Blackthorn and Grim is a beautiful thing to watch.  Events in this book meant that Blackthorn decided to withhold some information from Grim, and it made for a painful yet satisfying conflict. I love that they are rediscovering themselves and their humanity through one another.

The highlight of the series continues to be the main character and their relationship, though the beautiful and terrible fairy tale also added an edge that I missed in Dreamer’s Pool. This is certainly a novel that would delight all Juliet Marillier’s fans!