I had serious doubts about this book initially as it was marketed as ‘Game of Thrones for teens’, which raises the bar ridiculously high. However, I had a lot of fun with it and think it’s a great first taste for those struggling to get into high fantasy. 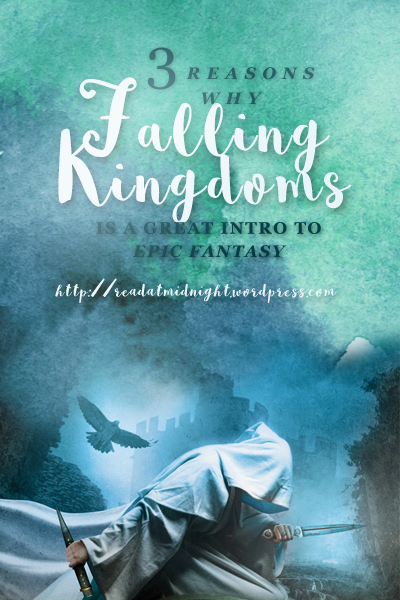 Even in the darkest and most cruel person, there is still a kernel of good. and within the most perfect champion, there is also darkness.

Like Game of Thrones, this series includes multiple POV from 5 different characters.  I always love when the author decides to do this, as I love getting into the heads of different characters.  When you can see things from someone’s POV, it’s hard to think of them as a villain – it’s also hard to think of anyone as pure and good. For me, morally gray protagonist is where the magic happens – it’s damn hard to relate to a squeaky clean saviour, just as it’s damn hard to sympathise with a moustache twirling villain.

2.  Interesting Worldbuilding with Potential for Complexity 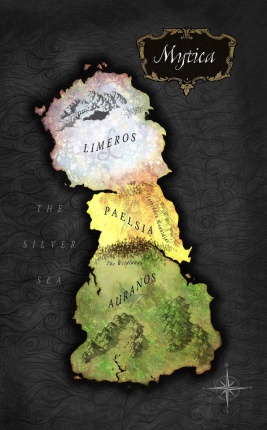 Personally, an essential element of any high fantasy is a well realised world with large scale and potential for conflict.  We have that in the spades here with the three kingdoms of Mytica.  There’s beautiful, lush Auranos to the south flowing with wealth and joy. On the other side of the spectrum lies the cold, frigid land of Limeros – whose citizens are devout in their worship of a lost goddess.  In the middle lies the poor, barren land of Paelsia, a land that despite all odds have enough magic to support the world’s best vineyards and a budding revolutionary.  The events in Falling Kingdoms throw these nations at one another to directly confront centuries of bubbling anger and resentment.

There’s also a hint of a more developed magic system, another crucial aspect of fantasy.  I love the mythology behind the two goddesses: Cleiona and Valoria. I’m also intrigued by the lost magic of the land and the roles the Watchers have to play in future installments.  Though this aspect of the book was not fleshed out, I’m happy knowing there’s five more volumes to develop it.

3.  Intriguing Relationships at the Heart of Grander Conflict

I really enjoyed reading the interactions between all the different characters and the underlying current of either mistrust or love between them.  I’m especially to see how the interactions between Cleo-Jonas and Cleo-Magnus will evolve, as they seem bitter enemies at the moment, but I can see those relationships doing a 180 quickly and believably.  This fluidity to the character relationship is something that I can totally get behind and support.  I am also excited to see how Lucia will interact with the other characters, as she’s largely limited to Magnus at the moment.

Mild spoilers though: there’s fauxcest here.  Which, while something I am more than accustomed to seeing in South Korean dramas, was quite creepy here.  Thankfully, the author seems to agree (I think? I haven’t read the sequel at this stage).  Nonetheless, it at least makes ground for interesting character relationships.

I do think that Falling Kingdoms is a great fantasy series to cut your teeth on if you are turned off by the door-stoppers, multi-volume saga in pre-existing adult series.  I would hesitate to call it a ‘lighter fare’ or ‘for teens only’, as that’s beyond condescending and untrue – but I do think that the writing and plot is a lot more accessible for a younger audience.  I had so much fun with it, and will definitely be reading the sequels before the release of Frozen Tides.