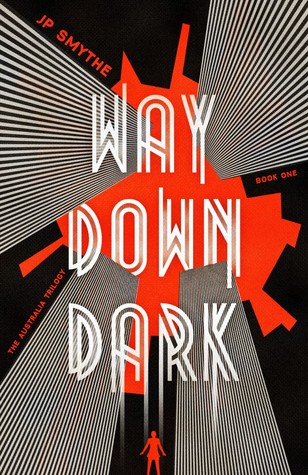 I really enjoyed writing my review of Red Rising, so I thought I would adopt a similar format here.  Here’s to hoping my blog does not turn into Buzzfeed: filled with redundant lists *whistles*

Not everybody could be saved, that’s how the story goes. The people sent up in the ships – they were the lucky ones.

First, an intro:  Way Down Dark is follow the spaceship Australia.  It carries the descendants of humans from generations past who fled the Earth when life as we knew it collapsed.  They’ve been drifting endlessly in space, the ship – once a mode of transport to salvation – is now the only world the humans know.

‘I’m not special,’ I say, ‘that’s right. I’m really not. Anybody could have done what I’m doing, but they didn’t. So I am going to. Maybe that’s enough.’

You know how a lot of books just have one standout female characters while the rest of the cast just kinda… there? I’m looking at you: Graceling, The Hunger Games, and co.  It’s not like that in Way Down Dark.  In fact, the book is heavily focused on the females of the ship and their interactions.

We have Chan, our narrator: strong, cynical, but kind. When her mother passes away, she made Chan promise: Stay out of trouble. Be selfish. Don’t die. Australia is a harsh environment, a world where the strong eats the weak (at times, literally). To survive, Chan has been taught to look out for #1.  She’s well equipped for it, too: having been trained to fight & conjure parlour tricks that passes off as magic to the uneducated masses of the ship.  Chan struggles with the internal code her mother and Agatha (a second mother figure) have taught her, she can’t help but want to reach out to protect those who are too weak to fend for themselves. I liked that she didn’t come off as mightier-than-thou, but a real girl with struggles and insecurities about all her decisions: even the morally right ones.

There’s also a host of other female characters with backgrounds of their own.  Riadne, Chan’s mother, though dead at the beginning of the novel – is a constant force in the book. She was kind and well-respected on the ship, but also had a rebellious streak that ran even wider than Chan’s.  There’s Agatha: an older woman’s who tough as nails and a surrogate mother to both Riadne and Chan.  Sweet little Mae, saved by Chan from certain death, continuing the strong maternal theme that runs throughout the story.  Our main villain is Rex, the fearsome leader of the Lows – who’s terrifying, yet still written to have glimpses of humanity.  There are also others such as the Pale Ladies and Bess, who I’m sure will have even more of a role to play in later books.

The Lows? They’re savages. Vicious, nasty, the basest parts of us run wild. The Bells? They’re idiots. Lunks. Driven by impulse rather than anything resembling logic. But the Pale Women are something else. They have faith, which makes them tricky.

As in many YA scifi novels, we have people broken down into groups.  The ones that inhabit Australia are vivid and colourful.  There are the free people, who try their best to make a living on the ship despite order having fallen wayside a long time go.  There are the creepy religious zealouts: the Pale Sisters, at first vicious dealer of ‘justice’ – now reclusive women that act on the words of their Bible.  Finally, there are the Lows, creatures who have shunned the human code of conducts.  All of these groups are drawn with such distinct characteristic, I could almost smell their breath and see their scarred bodies as I was reading.

The Ship itself is a character of its own.  Both the characters’ homes and something they grew to despise. It had beautiful places like the arborateum: an orchard of sorts.  It also had terrifying corners such as the Pit: basically a landfill of corpses collected from all over the ship.  There are the colorful free markets, the dark corners where the Pale Sisters hang out – each of these places were illustrated clearly on the pages through James Smythe’s words.

I don’t want to spoil too much so I’ll keep this section brief.  At 56% mark (according to my Kindle), the book does a 180 and all of my expectations were crumbled.  I was very certain the book was headed a certain direction, but one sentence changed it all!  Looking back, the twist might have been predictable if I wasn’t tearing through the story at breakneck speed – but I liked that surprise.  The direction James Smythe takes the story is very bold: leaving a lot of ground to be uncovered in the subsequent novels.  It also promises that the world in the book is a lot larger, and a heck of a lot scarier than we initially thought.

The romance in this book was subtle. As it should be, with anarchy happening on the ship and death always just one mistake away.  I also liked that in some way, it is a gender reversed romance:  Chan is the heroic figure, whereas Jonah supports and follow her lead.  Though there was not a lot of romance, I enjoyed their connection.  I liked that though they cared a lot for one another, it was not an instant omg-can’t-live-without-you vibe that you often see. They helped one another stay grounded and human in a tough situation, something I can always root for in a relationship.  Plus, there’s two more books for this ship to sail in a more swoony direction!

5.  You Appreciate Books About the Power of Stories

Everything on Australia revolves around stories. They’re all we have to entertain us; and all we’ve got to keep the little bits of who we were before we left Earth alive. We’re told them from the moment that we’re born, and we keep them alive until the day that we die. We create them, and we destroy them. The stories keep us safe, and they keep us scared. Sometimes, it seems like you need one to feed the other.

There are many important stories essential to these characters.  For Chan: it’s the stories Agatha tells her of her mother, helping us understand the connection between these three women.  For Jonah and the Pale Sisters: it’s the stories in their Three Books that serves as their code of conduct – but also as a promise of a better world waiting for them out there.  Even our villain, Rex, has a story: the one she literally carved on herself to claim leadership and reign amongst the Low.  Finally, the whole of Australia’s existence is sustained by a story that allows them to hope– though it was cruelly shattered by the conclusion of this book.

And OMG you guys, the conclusion of this book!

Why It’s Missing One Star

Overall, a tense, moody read with a cast of female characters that have meaningful interactions.  What are you waiting for? Buy it!

Thanks to the lovely Kelly and Brett for their relentless campaigning of this book, I would never have found it otherwise.